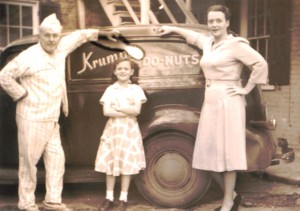 The story of Krumpe’s Do-nuts began when Rudolf Max Albert Lewis Krumpe, a young German, came to the United States shortly before World War I.

Rudolf was born on July 10, 1894 in or near Rudolstadt, Germany, which is located in east-central Germany on the Saale River. Rudolstadt was a small industrial city which produced chemicals and porcelain. As a young boy, Rudolf dreamed of going to sea, and as teenager set out to become a merchant seaman. As a merchant seaman, Rudolf had the opportunity to travel all over the world.

One particularly important voyage landed young Rudolf in the United States on a merchant ship, the Julia Luckenback. On January 3, 1913 the Julia Luckenback was steaming on its way back to Baltimore from a voyage delivering coal to Tampa, Florida. As they approached the mouth of the Cheasapeake Bay the weather became treacherous – gale force winds, ice and snow. The night before, Rudolf had carefully packed his sea-bag in anticipation of returning to Baltimore for a “real sailor’s holiday”. However, at 7:45 a.m. the Julia was struck by The British ship Indrakuala. In just a few minutes the Julia sunk to the bottom of the Chesapeake Bay with only eight members of her thirty-man crew surviving. Luck, fate, or the Grace of God spared Rudolf. We mention this only because here our story might have ended.

As with most families, World War I was a significant event in Krumpe history. At the outbreak of World War I Rudolf was in the United States. Fortunately, the war prevented him from returning to his native Germany. Had he been able to do so, he would certainly have been conscripted into the “Kaiser’s Army”. Instead, he continued to work as a merchant seaman, but his trips were mostly along the east coast and on the Great Lakes.

Eventually during the war, Rudolf enlisted and served in the United States Coast Guard. While on a trip to Pittsburgh, PA he met Anna Lee Palmer who had grown up in Alberta, VA (Stevens City). They married and Rudolf retired from the sea. He worked at various jobs including painter and steeple-jack.

In the early 1930’s Rudolf took a job as an apprentice baker in a do-nut shop in York, PA. He enjoyed making the do-nuts, and was fortunate to buy the recipe from the owner. Coincidentally, this was about the same time that Dunkin Do-nuts and Krispy Kreme Do-nuts were getting their start. The do-nut had become an integral part of American culture. In fact, Presidents and celebrities were often photographed eating do-nuts.

Rudolf started his own business first as a “bob-tail” route which he established in Harrisburg, PA. He would buy the do-nuts from the baker in York at a discount and sell them to his wholesale customers who sold them in their stores. After his route grew enough to support his own shop, he opened the first “Mother Krumpe Do-nuts” shop in Harrisburg.

In 1936 Rudolf moved his family to Hagerstown, MD where he opened the second “Mother Krumpe’s Do-nut” shop and a third shop in Winchester, VA. Soon after moving to Hagerstown, Rudolf’s wife, Anna Lee passed away, leaving behind Rudolf and their four children.

These were still the depression years. Unemployment was as high as twenty-five percent, and it was hard to make a living. As the decade ended there were new war tremors in Europe and a growing anti-German sentiment – and even a boycott of German heritage businesses in the United States.

Again, like most American families the Krumpe’s were affected by World War II. Almost every able-bodied man of age served in the war effort. Rudolf’s oldest sons Max and Bill both dropped out of high school and joined the United States Merchant Marines.

While the two boys were sailing around the world with the Merchant Marines, the war caused shortages and rationing of commodities such as flour and sugar back home. There was even a black market for some of these materials. Consequently, “Mother Krumpe’s Do-nuts” could not survive. The shops were closed and the Krumpe family moved to Funkstown, MD, located just outside Hagerstown. Here the family opened “The Do-nut House”. The family lived above the small shop, while making do-nuts and operating a small restaurant below. Rudolf and his second wife, Margaret Palmer, continued to operate “The Do-nut House” until his death in 1970. It was finally closed about ten years later when Margaret retired. 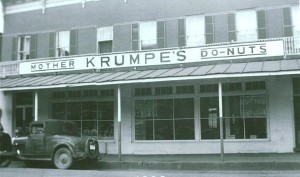 Born in 1926, Max Krumpe grew up in the do-nut business – working in the shop, peddling do-nuts from his bicycle to the WPA workers as a boy or making deliveries to wholesale customers in the Krumpe do-nut truck.

Money was scarce during the depression, but still life offered its pleasures. Fishing and swimming in the Antietam Creek and Potomac River, canoeing or gigging for frogs, riding the trolley to Williamsport for ice cream or dancing. And of course, his life-long love, Juanita.

However, Max had a goal to go around the world. Events soon would make that goal all too real – World War II. After leaving school at the age of seventeen, Max joined the United States Merchant Marines, and was sent to Sheepshead Bay in Brooklyn, New York for training.

By 1941 the German U-boats were sinking United States merchant vessels more than twice as fast as the combined shipyards of the United States and Great Britain could build them. President Roosevelt soon began a massive shipbuilding program to replace the lost ships. He selected Henry Kaiser, builder of the Boulder and Grand Coulee dams, too run the “Liberty Ship” program.

Sailors were needed to man the ships being built by the “Liberty Ship” program. The U.S. Maritime Service Training Station at Sheepshead Bay was created to train 35,000 merchant seamen a year. Roosevelt said “the entire country joins me in wishing you every success and in paying tribute to you men of the Merchant Marine who are so gallantly working and fighting side by side with our Army and Navy to defend the way of life which is so dear to us all.”

After completing his training as an able-bodied seaman, cook, and baker, Max signed on to Liberty Ships ferrying supplies and ammunition to the Allied Forces in Europe and Africa. His trips took him all over the world – The Persian Gulf, Mediterranean Sea, Europe, The North Atlantic and later the Pacific and Japan.

Forty-five years after the war President Ronald Reagan awarded Veteran status to members of the United States Merchant Marine (USMM) who had served in the North Atlantic during the worst years of the war. (The USMM suffered the second highest casualty rate of any of the branches of the military during World War II, second only to the United States Marine Corps) Max was very proud to finally receive national recognition for the service of the Merchant Marine during the war.

In 1947, Max returned home to Funkstown and worked in the Do-nut House for a time. However, he wanted to marry his high school sweetheart, Juanita Boward and start his own business. So Rudolf and Max agreed to split the business. Rudolf kept the Do-nut House, but gave the wholesale delivery route in Hagerstown to Max.

Max and Juanita were married in 1948, and started Max’s shop called “Krumpe’s Do-nuts”. They opened the new shop on Jonathan Street in Hagerstown, but in 1950 bought a house on Maryland Avenue and moved the do-nut shop to a building behind their home.

Juanita had dropped out of school in the eleventh grade to work at Sears, Roebuck & Company as a bookkeeper and receptionist. After they married, she left Sears to raise the family and help Max with the do-nut shop.

Max and Juanita worked together to build up the business. They built a good reputation, and expanded to three do-nut routes serving all of Hagerstown, Williamsport and Boonsboro. Customers even began showing up at late hours of the night while the do-nuts were being made and asked if they could buy the hot, fresh do-nuts. A trip to Krumpe’s late at night soon became a popular event in Hagerstown.

The “little do-nut shop in the alley” attracted a lot of interest, and there were many newspaper articles and television segments mentioning them. Among some of the most notable were Maryland Public Televisions’ Nightly Business Report, WBAL TV from Baltimore, MD and even mention by Paul Harvey on his radio broadcast. Max and Juanita operated Krumpe’s Do-nuts for over fifty years until Max’s death in 2000.

Max and Juanita began raising their family in 1950. They had four children, Rudolph, Jackie, Terry and Fred. The boys, as they were called, grew up in the do-nut shop, and started helping out almost as soon as they could walk. By the time they passed their driving tests they were running the do-nut routes when a driver was off or in the summer when there was no school.

When Max passed away he left the do-nut business to his two sons, Rudolph and Fred. They incorporated the business as Krumpe’s Do-nut Shop, Inc. in 2001, and soon after Rudolph’s oldest son, Max joined the company. They expanded their service area to include Frederick, MD and Martinsburg, WV by the addition of two new do-nut routes.

Today, the goal of Krumpe’s Do-nut Shop is much the same as it has always been – to continue to make the very best quality do-nuts and to provide the best service so that their customers can continue to enjoy this Hagerstown tradition.